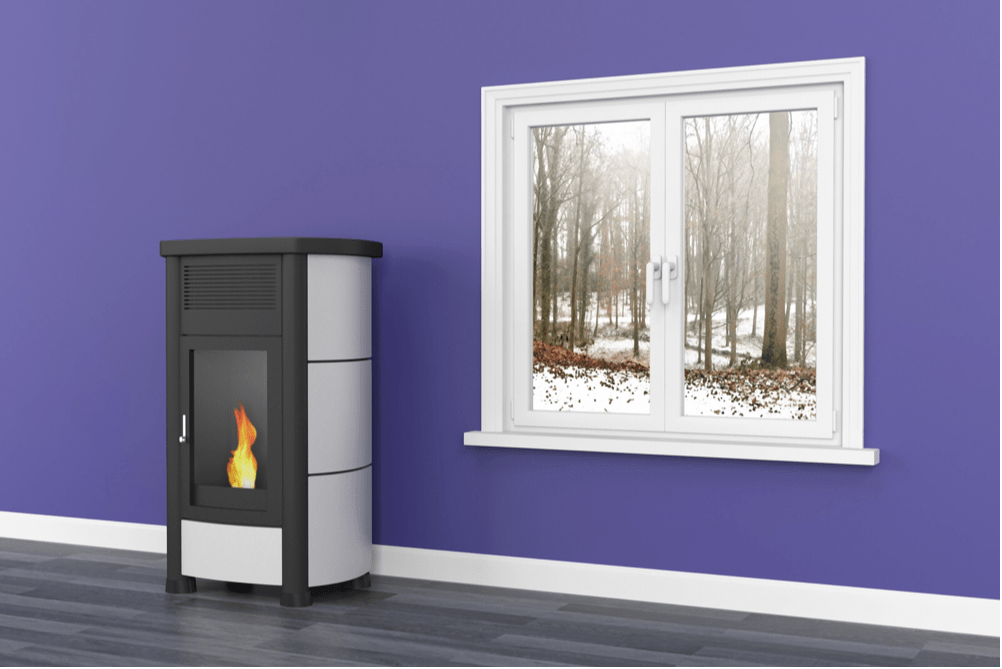 When you are installing your pellet stove all on your own at home the temptation to cut corners becomes very obvious, with most people choosing to go the route of already existing holes rather than make new ones. However, the question should always be asked before going ahead with something, can it be done and what are the consequences of cutting a corner?

You can route your vent out of a nearby window, however, there are still mounting, bends, and regulations that need to be followed. You cannot simply point the vent out of a nearby open window and leave it be as this will cause several problems to the flow of air inside and outside your home. Venting through a window is always a possibility but it should always be the last resort as going through the wall or roof is always better.

There are several reasons why a vent needs to be run directly through the wall and not through a window or the ceiling, with most people that install pellet stoves being aware of these. Understanding why it is not just simply installing and letting the stove do its thing is a vital part to understanding how your pellet stove works and what is needed for it to run properly.

How to properly vent a pellet stove?

There are four main ways to vent a pellet stove out of your house, each one is more effective than the next. Professional installers will always try to vent a freestanding pellet stove out of a wall, while wall-mounted pellet stoves are almost always vented out through the ceiling. Doing so ensures that all the bad air that is produced does not escape into the house.

However, each type of vent location has its advantages and disadvantages with specific houses all requiring very different setups. Knowing what each vent type is and how the shape of your house influences these vents will make a big difference to your home. Pellet stoves are each unique and the shape of your home greatly affects the way your pellet stove will be piped in.

This is the best way that a freestanding, and sometimes a built-in, pellet stove can be routed allowing the smoke and dirty air to escape out the side of the building instead of through the ceiling. Most people prefer to do this because of the drafting effect that takes place, this effect means that there is a natural movement of air that forces air out of the system.

This is why you will always see a pellet stove connected with L-shaped vents; these are the vents that almost physically pull the air out of the system. Further, the shape helps to trap in any hot air that might be trying to escape with the vented air. L-shapes usually bends beds in two locations, one bend above the stove and another on the outside of the house.

If you can’t place an L-shaped vent through a wall because the stove is either in the middle of the house, or the walls are made out of bricks, then the only way left to go is through the ceiling. This method is effective in allowing air to escape out, however, it has the habit of letting a lot of hot air escape as well.

This is when you have no options left, usually, when you are in an apartment and can’t go through the wall or the ceiling, you will need to go through a window. Doing this properly can be a challenge and a common mistake people make is not sealing the mounts properly, causing leaks. However, if done properly you should not notice at all that the pellet stove is venting out of a nearby window.

When done properly most vents that go out of a window will use a smaller window, replacing one of the window panes with the vent. This allows for more control over the situation, where the vent can be properly mounted and sealed using the right tools, with most installers preferring to add a few layers of insulation as well.

It may be that you are replacing an already existing wood stove or fireplace with the pellet stove and don’t want or need to install a completely new venting system. When doing this you just need to ensure that the already existing vents are perfectly sealed, including the location beneath the new vent.

As pellet stoves use smaller vents than most other systems, they usually fit quite snugly inside older already installed vents. To ensure that none of the soot and other gases are escaping back into your house you may have to close up part of the already existing vents to ensure that there is not a backdraft.

Why should a vent always have a rise before venting out the wall?

Vents must always rise before executing in an L-shape to ensure that the gases are properly escaping from the system and that enough speed is created to ensure that the complete system is working properly. While vents that go straight from the stove out of the wall can work, these vents easily become clogged and can have a bit of backdraft onto the fire in your pellet stove.

Most of the time you will see that pellet stoves have bet vents that rise a few inches or even a few feet above the actual stove before going out of the nearby wall. Ceiling vented stoves do not always have this problem as they rise straight up, which is why they can be such a problem to keep clean and maintain.

Having a slight rise is the best way to ensure that as much as possible of the dirty air escapes the system as possible, the more the air speeds up and moves the less you have to clean the vents. A common mistake people make is having their vents being too horizontal, causing soot and ash to gather inside the vent that can eventually become a cleaning nightmare.

What type of vents should be used?

The best shape for your vents to be is an L-shape, with a straight rise coming from your stove that then goes horizontally out the side of your house. This allows for the most heat to be captured by the vent inside your house, as well as a large majority of the soot and debris to be exhausted out of your house.

L-shaped vents have been the norm for pellet stoves since they were first installed as they also allow the stove to be further into the center of a room instead of hugging a wall. A professional installed will always prefer to do this, even when they have to vent the stove out of a window. However, this does not mean that it is the only way to vent a pellet stove or that it is, specifically the best.

Permanent, built-in pellet stoves that have been placed inside walls will have normal vertical vents, this allows for the vent to stay much cleaner for much longer. These stoves can have their vents installed like this because they are usually installed when the house is being built or remodeled. Which allows the builder to properly seal and trap any hot air that would escape through the vents.

Venting a pellet stove through a nearby window may not seem like the best idea, but it can and has been done several times over the years. Usually when a pellet stove is installed in larger, more well-built homes that have solid brick and mortar walls. In some cases, the window is the only place you can safely vent your pellet stove.

Pellet stove vents are important and having one that leaks gases and other things into your home will only ever lead you to have a gas-filled home!

link to Why Does My Pellet Stove Auger Keep Jamming?

Pellet stoves are a popular and efficient way to heat a home, using compressed wood or biomass pellets as fuel. These stoves rely on an auger, a motor-driven device, to feed the fuel from the hopper...

Continue Reading
link to Pellet Stoves vs Kerosene Heaters: Which is Right for Your Home?

When it comes to alternative heating options, pellet stoves and kerosene heaters are two popular choices. Both offer a way to heat your home without relying on traditional forms of fuel, such as...

Forest & Shanna hail from the Northwoods in Wisconsin. They enjoy outdoors and traveling. Living in the Northwoods, they know the importance of having a good source of heat for their home.

This site is a participant in the Amazon Services LLC Associates Program, an affiliate advertising program designed to provide a means for sites to earn advertising fees by advertising and linking to Amazon.com. We are compensated for referring traffic and business to Amazon and other companies linked to on this site.